Breast augmentation is the most popular aesthetic surgery procedure. In the United States, 450,000 implants are placed for reconstructive surgery purposes and 5,083,717 for breast augmentation annually. Given its history, there is a vast amount of literature to differing opinions, philosophies and controversy regarding its safety. In recent times, controversy has surrounded silicone implants, with an increased association with breast implant-associated anaplastic large cell lymphoma (BIA-ALCL). The popularity of this procedure would behove all plastic surgeons to remain abreast of the science and the clinical literature in this rapidly evolving field.

Glandular hypomastia may occur as a developmental or involutional process and affects a significant number of women. Developmental hypomastia is seen as primary mammary hypoplasia, or as a sequela of thoracic hypoplasia (Poland’s syndrome). Involutional hypomastia may develop in the postpartum setting and be exacerbated by breastfeeding or significant weight loss. Inadequate breast volume may lead to a negative self-body image, feelings of inadequacy and low self-esteem. Such disturbances may adversely affect a patient’s interpersonal relationships, sexual fulfilment and quality of life.

Initial consultation for augmentation should begin with open-ended questions about the patient’s goals and expectations. Patients today have often invested time researching the internet, Facebook forums, chat rooms and learning from friends who have had the procedure. The surgeon should be able to form an impression of the patient. Any concerns about the patient’s level of understanding, unrealistic expectations, or self-esteem issues should be explored prior to proceeding with surgery. A medical history and physical examination are essential for assessment of risk factors and candidacy for breast augmentation.

There has often been some confusion within patients as to access incisions and pocket creations.

This is the most common and versatile access incision. It allows for clear dissection and subsequent visualisation of the implant pocket. The technique may reduce the rate of capsular contracture through clear visualisation. This allows good hemostasis and reduced risk of bacterial contamination through the incision and operative field. Its direct access to the glandular-muscular interface and overlap allows manipulation for the best symmetrical and aesthetically pleasing outcome. The drawback of this incision is the relative visibility of the scar. This is the most common incision for breast augmentation procedures, and is used for nearly all of Dr Farhadieh’s patients (who do not also require a breast lift or reduction). 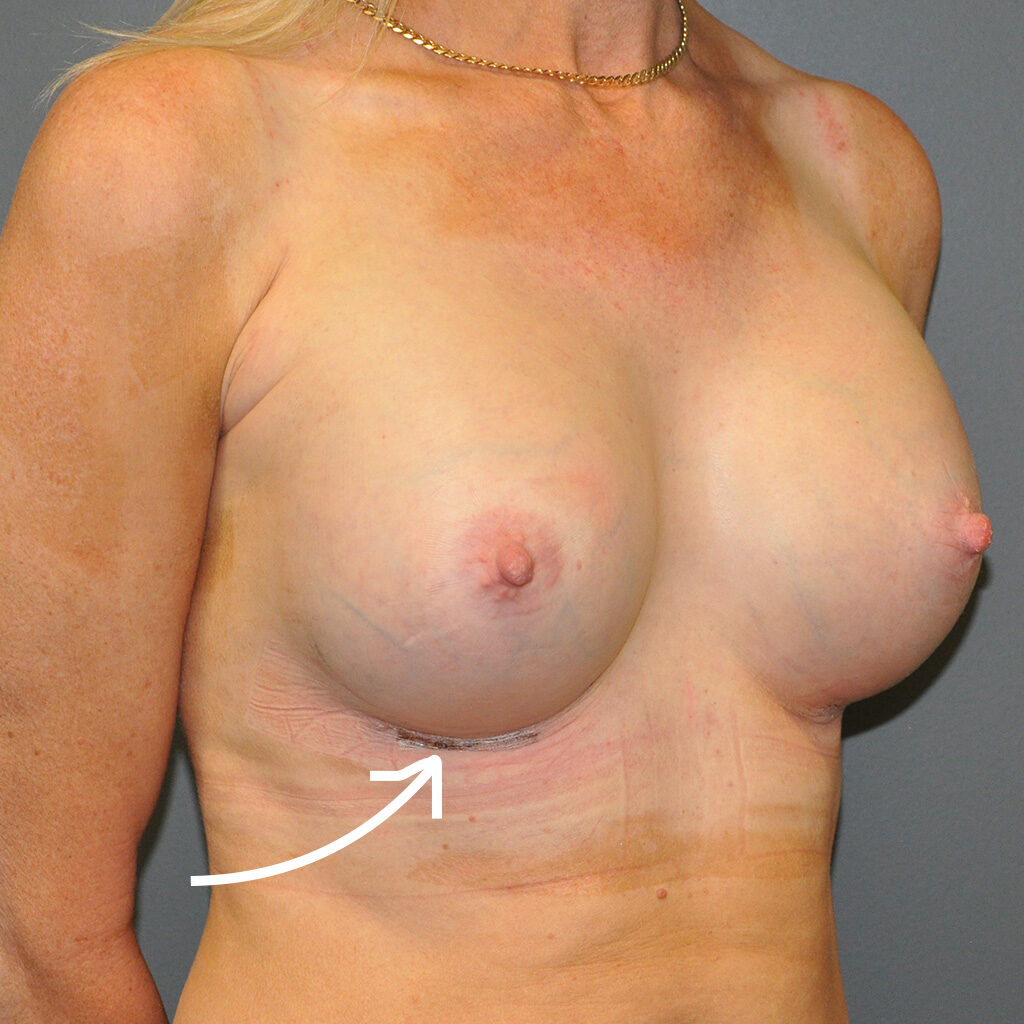 Above image: This 45 year old patient underwent a breast augmentation procedure with Dr Farhadieh. The arrow is pointing the inframammary fold, where the inframammary incision can be seen. Photo taken at 1 week postoperatively.

The principle advantage of this incision is the resulting scar, which is usually considered well camouflaged and inconspicuous. The incision allows for access and creation of subglandular and submuscular pockets. It is associated with reduced sensitivity of the nipple areolar complex (NAC) as well as increased rates of periareolar pain. It is also more likely to interfere with lactation and breastfeeding. Moreover, it is also exceedingly difficult to place many cohesive or anatomically shaped implants through this incision.

This was first developed in the 1970s as an open technique, before being adapted to a minimally invasive approach. However, the open blunt technique led to a series of suboptimal aesthetic outcomes, due in part to uneven coverage of the implant and its malposition owing to a lack of controlled dissection of the vascular inferomedial aspect of pectoralis major muscle.

This technique was developed in the 1990s, and the first large series reported by Dowden argued for its use based on its versatility (access to both sub pectoral, as well as sub glandular pockets), minimal scarring with no implant tension on the wound, reduced nipple sensation, elimination of dead space, and good control of the implant pocket. This technique has limited application and is only suited for inflatable saline implants. Many surgeons feel that this is not a surgically sound technique due to poor visibility of the operative field. Its safety, based on basic surgical principles, cannot be recommended in comparison to other incisions.

The subglandular implant pockets were dissected in a subglandular plane. Where the soft tissue envelope is considered thick enough, many surgeons continue to use the subglandular pocket for implant placement. Essentially, in this approach, the pocket is created directly behind the breast tissue so the implant is positioned in front of the muscle.

This approach was first developed to reduce the risk of capsular contractures. However, these are associated with implant animation superiorly on pectoralis major contraction independent of the overlying breast tissues. In simpler terms, the pocket is created beneath the muscle. 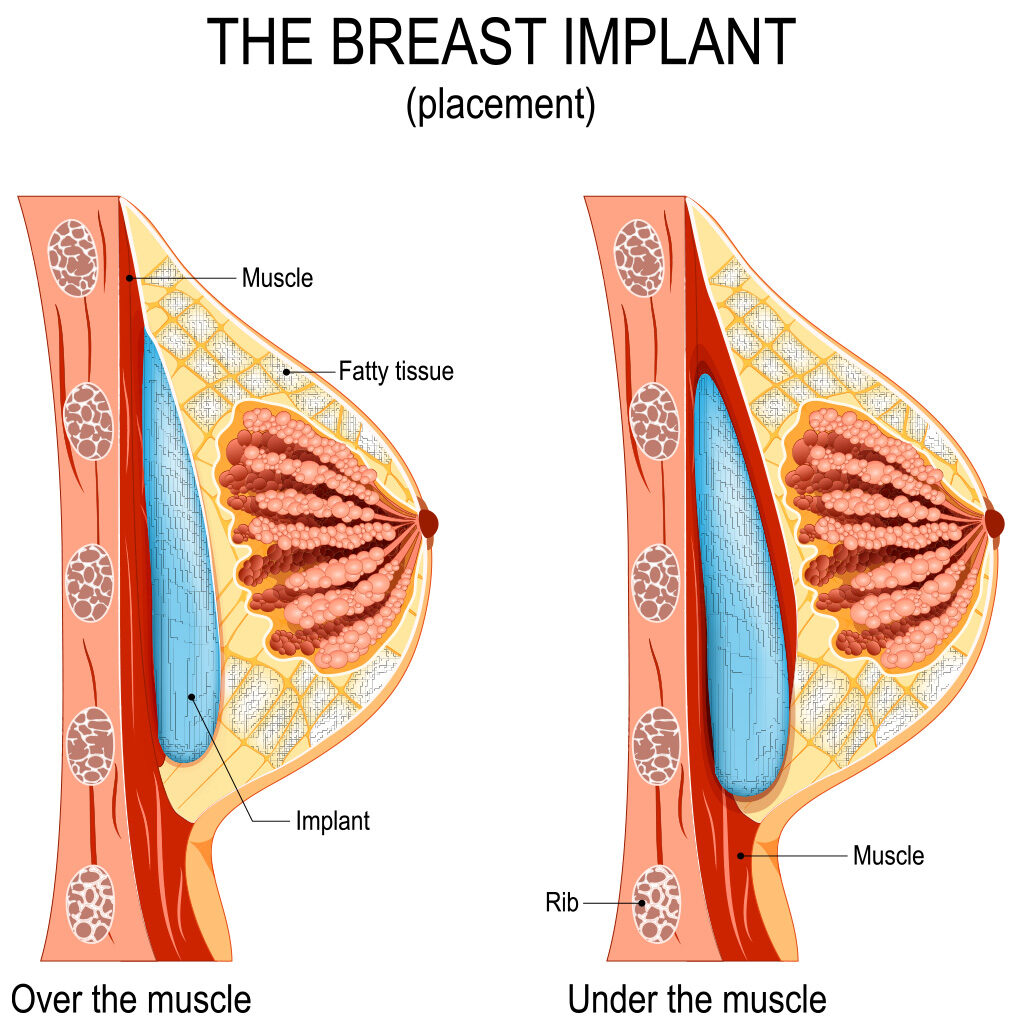 This approach is developed in either a complete or partial submuscular pocket. The lower edge of the pectoralis major is dissected off the chest wall and lower sternum. A dual plane augmentation is where the upper portion of the breast implant is covered by the pectoralis major muscle and the lower part of the implant is placed under the breast gland. In a subglandular breast augmentation, the implant is placed above the muscle and under the breast gland.

All information provided in this blog has been taken from the internationally hailed and critically acclaimed reference textbook for plastic surgery, of which Dr Farhadieh was the Chief Editor.

Within the past 24 hours, Allergan has announced a worldwide...