How Fillers Nearly Cost One Woman Her Face And Her Life

Sydney woman Jenny Winnall had been receiving Botox for years when she decided to try fillers.

“I had been sick and I had lost a lot of weight in my face,” she tells 9Honey. “I’d had Botox by the same doctor.”

Jenny began receiving regular injections for years, until 2013 when a lump formed on her face.

“I noticed a lump had appeared on my cheek,” she says. “I was really concerned.” 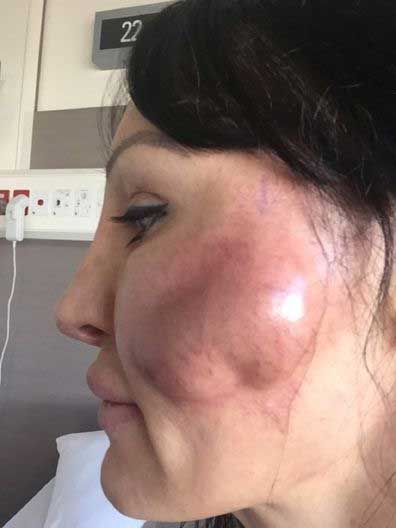 Jenny began receiving filler injections before a lump formed on her cheek. (Supplied )

Jenny began receiving filler injections before a lump formed on her cheek. (Supplied )

“I rang the doctor and told the receptionist there was a lump,” she says. “She asked me to come in for an appointment but the doctor is only there one Saturday a month, so I sent a photo.”

Jenny says she assumed the doctor had seen the photo ahead of her next appointment. At the time she was living with husband Jim in Canberra, and travelled to the doctor’s office in Paddington for treatment.

“I sent her a photo and I assumed he’d seen it,” she says. “He told me the only thing he could suggest was to inject fat.”

“I thought at the time it was unfair considering I had already spent so much money on my face in his rooms,” she says.

Eventually Jenny managed to convince him to aspirate the lump.

After first developing the lump in 2013, it wasn’t until April 2014 that the aspiration happened.

“By January 2014, the lump was the size of a ten cent piece and tender to touch,” she says. 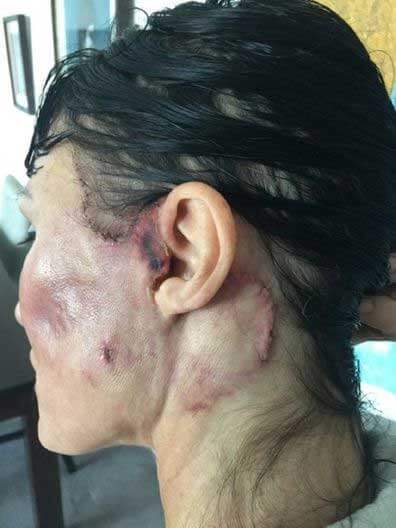 By the time she was treated, the infection had spread beyond her cheek. (Supplied )

“He aspirated the lump and a whole lot of fluid came out,” she says. “I said it looks like an infection. He said it was just the product and white blood cells.”

“As soon a I left his office, the lump filled up again,” she says.

“After my appointment, I felt disappointed,” she says. “The product was sold to me as a permanent filler. It obviously wasn’t and my cheeks were now uneven. By now my left cheek was slightly square looking, particularly, when I smiled.

“I couldn’t leave the lump there because it was making my face distorted.” 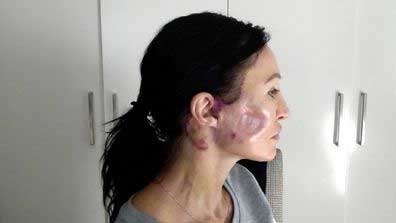 Jenny has been left with devastating scars. (Supplied )

By May, Jenny was begging for help.

“No other doctor wanted to deal with the lump because it wasn’t their work,” she says.

Jenny returned to the original doctor for further aspiration.

“Again, he aspirated it and I said, ‘That’s infection,’ and he said it wasn’t,” she says. “He didn’t even get the needle tested.”

After that appointment Jenny became even more desperate for help.

“As a woman, if we find a lump we are concerned and go to the doctor,” she says. “This was on my face!”

By this stage, Jenny had begun to feel unwell and was advised by another doctor to go straight to her nearest hospital emergency department.

She was treated with antibiotics for a severe infection and was then scheduled for surgery.

“I ended up spending 10 days in Canberra Plastic Surgery,” she says. “I had two operations on my face, which became lopsided. They had to take all the flesh from my face because the Aquamid had blended in with my cheek. This made it very hard to remove the infection.”

Dr Ross Farhadieh, the Sydney plastic surgeon who stepped up to assist the distraught Jenny told her he’d never seen anything like it before, or since.

She has sworn off all cosmetic procedures and encourages others to do their research before receiving any themselves.