Home | WHAT IS A SHORT SCAR FACELIFT SURGERY TECHNIQUE?

WHAT IS A SHORT SCAR FACELIFT SURGERY TECHNIQUE?

Perhaps no other part of our body relates more to our sense of self then our face. It is no wonder then that the face which stares us in the mirror reflects how we view and feel about ourselves and for better or worse how society broadly sees us. When considering facelift or facial rejuvenation surgery research is paramount.

One term which is often pops up in the research process is short scar facelift surgery. So what is short scarred face lift surgery. As we have seen, increasingly facial aesthetic surgeons utilise a variation of a Superfical Musculo-Aponeurotic System (SMAS) technique to achieve facial rejuvenation which is both natural and long lasting. A classic facelift incision extends through the temporal hairline, in front of the ear, extending to behind the ear and into the hairline. This incision is used to gain access to the face to then manipulate the SMAS using variations of this technique before re-draping the skin over the face. 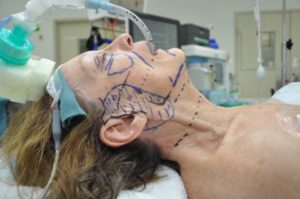 Figure 1. Short scar incision outlined in front of the hair line in black on a 72 year old woman undergoing a composite face and neck lift.

Increasing refinement of techniques and recognition that classic incisions increased risk of wound related complications including prolonged swelling or in some cases loss of skin as well as migration of the side burn hair to unnatural positions has led to the short scar technique. In this facelift surgery technique, the skin incision extends from in front of the side burn to in front of the ear and to a variable extent behind it. This shorter scar has the added advantage being less conspicuous as well as reducing potential complications including prolonged facial oedema.

After the incision is made in the skin variation of SMAS -based facelift surgery is performed before re-draping the skin and excising the excess. This helps with faster recovery and shorter down times which is increasingly the expectation of patients undergoing surgery. In future blogs we will discuss the various facelift surgery techniques.