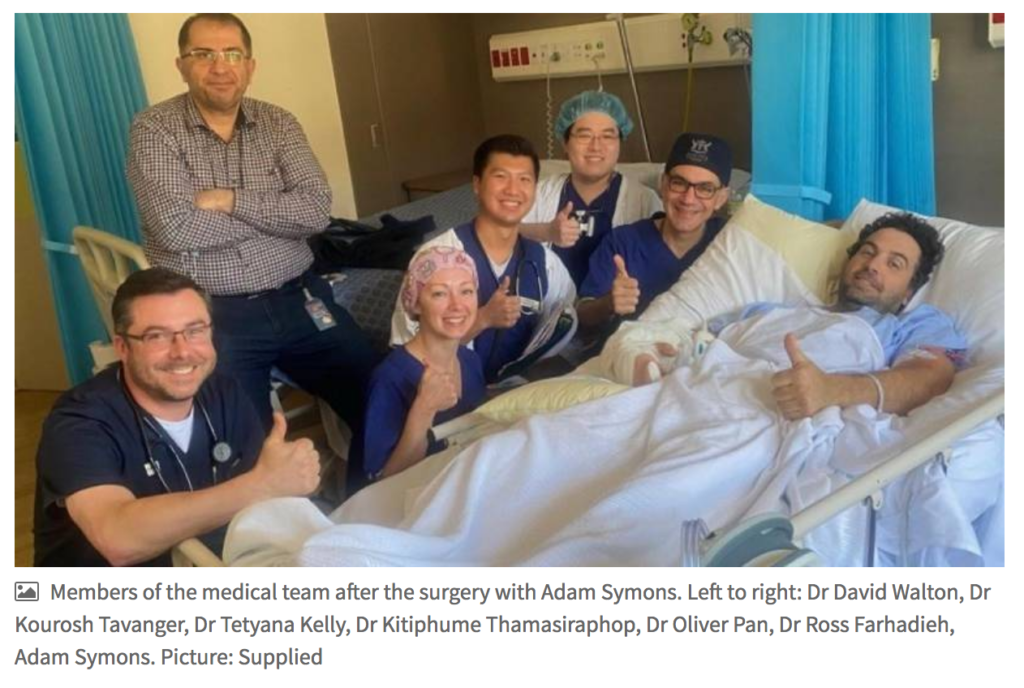 Adam Symons only had four hours to save his right arm after it got tangled and was pulled off at the elbow in a round baler on his farm near Wagga last Thursday.

During that time he drove 500 metres to get help and a farmer was able to tourniquet his arm.

From there he was flown to Canberra Hospital for surgery.

By the time he arrived at Canberra Hospital two hours had already passed.

In those two hours, plastic surgeon Dr Ross Farhadieh had driven frantically to Canberra Hospital and had prepared for a surgery to reattach Mr Symons’ arm.

It’s a remarkable tale and a miracle of modern medicine that Mr Symons’ arm was reattached after Dr Farhadieh and fellow surgeon Dr Krishna Rao led the team through a gruelling 11-hour surgery.

Mr Symons wasn’t quite ready to chat about the experience on Friday but gave consent for Dr Farhadieh to share his story.

“He was off making hay bales when his arm got caught in the machine … the consequence of that was because the machine is a sharp cutter it pulled his arm out,” Dr Farhadieh said.

“He then got on the tractor and went for about 500 metres for help and he was directly flown to the Canberra Hospital emergency department with the hand in tow.” 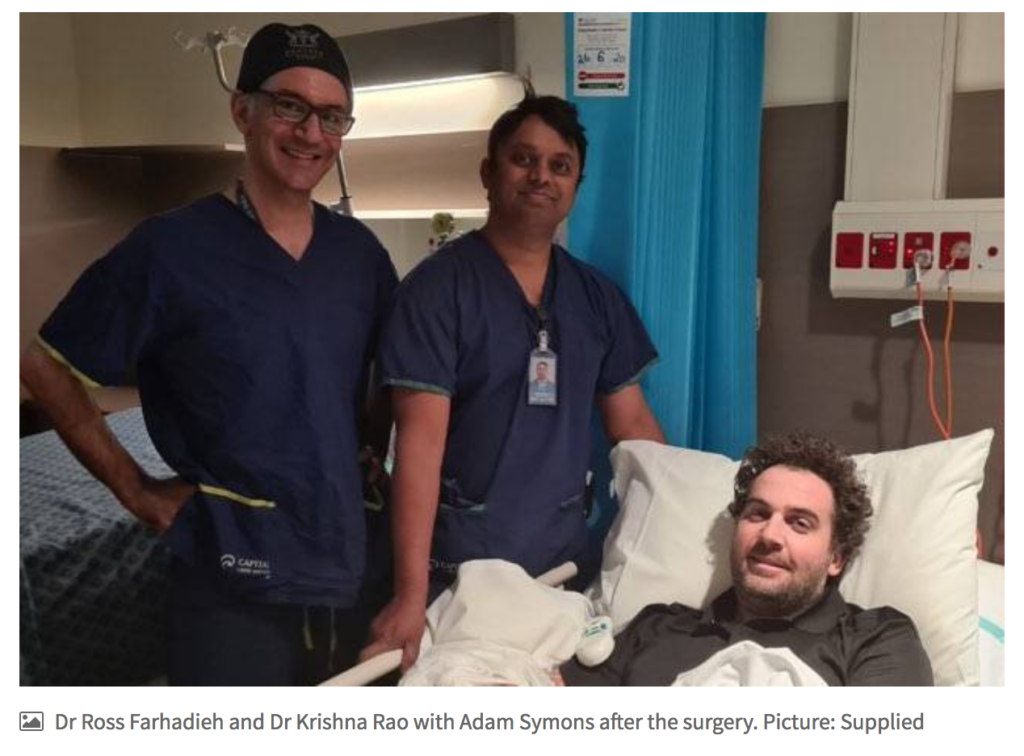 Once Mr Symons was admitted to the Canberra Hospital under the care of Dr Farhadieh, Dr Rao and the team it was a race against the clock to reattach his arm.

“Generally speaking the threshold for when muscles are beyond salvaged it tends to be about four hours,” Dr Farhadieh said. “During the first couple of hours we frantically washed, cleaned put hardware against his bone so his radius and ulna (his forearm bones) were fixed with plates and nails and then we put all the bits and pieces back together.

“He had blood running into his hand before the four-hour mark.”

It’s just over a week since the surgery and Dr Farhadieh said Mr Symons was recovering remarkably well but it would be a long road ahead.

“The next set of the road to recovery is relatively long, meaning once he has recovered from this surgery and we are happy there are no infections and everything is working well we have to give time for the nerves to grow back and for the joints to remain supple during this time period,” he said.

“Ultimately he has a number of other surgeries ahead of him and in terms of timeline we are probably looking at something approximately between 18 to 24 months before we have completed all of the additional surgeries that we will have to do.”

A successful surgery like this is a rare occurrence, Dr Farhadieh said, but Canberra Hospital has had a few similar cases over the years. “While these things generally tend to be a once-in-a-lifetime, if that, occurrence in most plastic surgeon’s careers [but] in Canberra we’ve had quite a few of these over the course of the last decade,” he said. “The Canberra Hospital is a major trauma institution and because of its catchment… we have a higher share of catastrophic trauma.”

Mr Symons’ family and friends have set up a GoFundMe pagefor the father-of-two, to help him and his family. They aim to raise $70,000.

Listen to the ABC interview here

Dr Farhadieh in the SMH

THE PRICE OF BOTCHED PROCEDURES

Dr Farhadieh on The Today Show